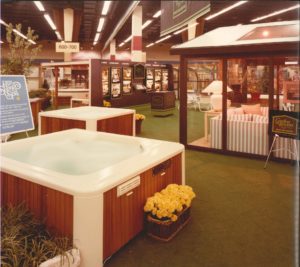 This photo was taken in the early 80’s of the Garden Rooms by Coleman® set up at Tarrant County Convention Center for the Spring Home & Garden Show.  Those are HotSpring® Spas in the foreground, not kidding!  NBC 5’s morning show with Bobbie Wygant filmed her show that day in that very Coleman Garden Room sitting on the gray and white striped sofa.  Big news for us, we felt like the kings of the show.  Also, I remember shoppers asking us repeatedly during the entire 4-day show, ‘what is a hot tub and why would I want something else that gets hot in Texas!’

Fast forward four decades, we still sell HotSpring® Spas (a lot of them actually) but much has changed.  Back in 1958 when Mr. Otis Coleman, a Fort Worth native, founded Coleman Metal Products Company building service station gas pump canopies his vision didn’t include hot tubs or saunas.  However, it was actually a very logical progression for the entrepreneurial Coleman family. It went something like this:

1981 – Upon return from a Colorado snow skiing weekend, RC Coleman (grandson) said a shaded patio or Garden Room was a great place for a hot tub…Enter HotSpring® Spas

2018 – Manufactured and installed the last Garden Room by Coleman

All DFW locations will be re-branded Texas Hot Tub Company prior to year end to better represent the products and services we now provide.