A New Spa: The Yin to Your Motorcycle’s Yang 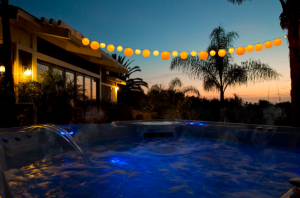 When you get a motorcycle, you begin a lifelong journey that probably started as a fantasy.

You get a helmet to protect you, a new license that proves you’re qualified to pilot that beast and you get a brand new spa to soothe away the aches and pains that go hand-in-glove with riding a bike.

Those first two are true. The part about the spa, however, is sadly just an idealist’s utopia fantasy.

But hey, just as getting a bike was once a fantasy, an investment in hot tub can become a reality if you put your mind to it, too — and what better person to buy a spa than a biker?

A Hot Spring Spas hot tub is the natural antidote to the grueling pain you bring home every time you come back in from the road.

You know. The inflamed, swollen hands from grasping the grips for all those hours. The stiff, throbbing legs and hips that went unstretched for that entire patch of highway. The tight, painful shoulders that absorbed all that vibration.

Cruising rules — but it also hurts. That’s the part they never reveal in the romanticized movies and shows that made you want to finally join the club in the first place. The guy hits the road, cruises for a few hours, pulls in the driveway, climbs down off his hog and dives right into the next scene.

No wincing with every turn of the neck. No 90-minute waiting period before he can feel his legs again. No passing off the un-openable jar of pickles to someone whose hands actually work.

You might not associate bikes with spas. In fact, if you had to pick the machine-world opposite of a Harley, it just might be a hot tub from Hot Springs Spas.

But why? They are perfectly complementary. They’re both highly sophisticated works of art, they’re both precision machines that represent a part of their owners’ life philosophies and they both make you feel good.

Only one, however, also makes you feel well.